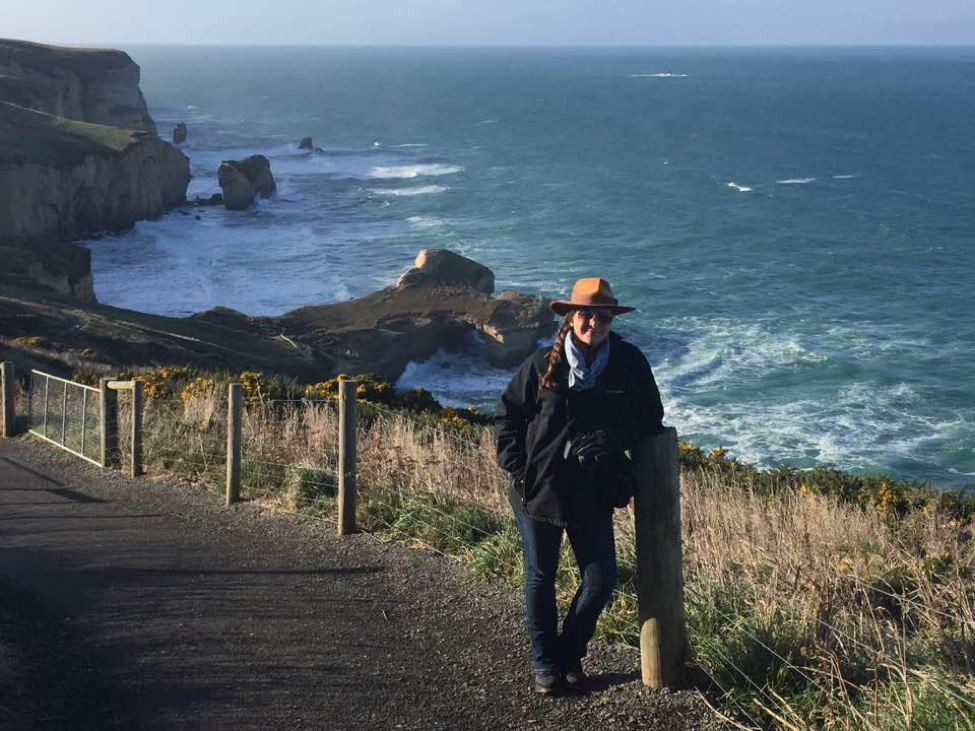 For a couple of years, Angie Balcom of Riverdale dreamed of moving to New Zealand and getting a horse.

“It was a crazy, far-fetched idea,” she said.

Maybe because her dream coincided with her time as an occupational therapy assistant (OTA) student at Central Community College-Grand Island, it was a way to escape the demands of class assignments and homework.

When Balcom graduated with her associate of applied science degree in OTA from CCC this past May, it seemed like the time had arrived to put dreams aside and face the real world. Then an email from Diana Watson, CCC’s international studies coordinator, popped into her inbox.

“It caught my attention because it said, ‘Study for a month and meet the natives,’” Balcom said, “and it was a study program in New Zealand.”

But the two courses – Sustainability and Environmental Science and Te Ao Maori: The Maori World View – made the OTA graduate wonder if she even qualified to participate in the program.

“I called Diana and she said it was open not only to students in those courses but also to individuals who wanted to go for the experience,” Balcom said. “It all happened pretty quickly. On Tuesday, I read the email; on Wednesday, I called Diana; on Thursday and Friday, I applied for a loan; and on Saturday, I applied for an expedited passport.”

And so it was that Balcom became the sole American among 12 Canadians descending on Dunedin, New Zealand, to attend the first summer series program being offered June 5-30 by Otago Polytechnic.

They experienced their first taste of biculturalism immediately on their arrival, with Otago Polytechnic staff giving them a traditional mihi whakatau (welcome).

“We were told that for the welcome one person had to stand up and speak for their group, but I was the only American,” Balcom said. “The sponsor said I could be part of the Canadian group so one of them spoke for all of us and then we sang ‘Lean on Me.’”

The students’ time was split between the classroom and outdoor learning experiences focused on sustainability and the first people of southern New Zealand, a tribe of Maori known as Kai Tahu.

“The first night we got to the Karitane Peninsula as the sun was going down,” Balcom said. “It is a sacred place to the Maori. There are 150 hills named after their ancestors in the region.”

They learned about the tribe’s relationship with the British Crown through the Treaty of Waitangi, the founding document of New Zealand.

“The Maori had no concept of land ownership when the Crown came over,” Balcom said. “They believe the land owns us and it is our duty is to preserve and maintain the land. They didn’t understand what they were signing.”

The students explored sustainability issues in some of the country’s most beautiful and untouched natural terrain and learned the skills needed to make a real difference in the future of the planet.

Some of their activities included kayaking in Otago Harbor, staying at a Marae (a traditional meeting house) and planting 140 plants and trees in the wetlands to offset the environmental impact of their air travel to New Zealand.

The Maori are working hard to revive many aspects of their community lives: their language and their cultural customs as well as their native animal and plant species.

“It’s all interrelated, culturalism and sustainability,” Balcom said. “They taught us about systems theory and how every decision we make impacts someone or something else, including the environment.  They believe every individual has to do their part.”

Back home, Balcom is trying to do her part by promoting recycling in the small towns around Kearney. When she discovered that the city couldn’t drop off big bins in Riverdale because it was outside the city limits, she went to Plan B. She’s made flyers to hand out in surrounding towns that list the recycling drop-off places in Kearney.

“People go to Kearney for a lot of reasons,” she said. “They could bring their recycling with them.”

Her experience in New Zealand was also a game changer for her future plans. She thinks she may now want to return to Polytechnic to get her bachelor’s degree in occupational therapy. Whatever she ends up doing after finishing her national boards, she’s trusting the universe to steer her in the right direction.